Hypatia was a renowned teacher of philosophy in 4th century Egypt, but her lessons conflicted with the rise of Christianity. Blamed for inciting leaders who favored the ancient wisdoms over religious rule, Hypatia was beaten to death and her works were burned.

Daughter of Theon of Alexandria, this inspiring mathematician, astronomer, and philosopher is honored with a liqueur crafted from classic bitters of herbs, flowers, roots, and citrus peels, distilled with pure spring water from our Napa Valley Estate, and made from an 1800s formulation, still colored by carmine red.

While our full ingredient list is under lock and key, we will share a few ingredients, along with some of their traditionally held benefits.

Wormwood
Helps to aide digestive problems, treats fever, depression and muscle pain. The most bitter of all plants, it is said to have hallucinogenic properties and therefore tightly controlled.

Bitter Orange Peels
Used for an upset stomach and to aid exercise performance.

Cochineal Beetle
Hypatia is not artificially colored. The red pigment is extracted from the bodies of female cochineal beetles that are found on cacti.

Bitters are incredibly complex products to make, requiring precision, patience, and an excellent palate. Hypatia includes nearly 20 different botanicals ranging from savory to sweet. Each addition must be carefully considered and executed in order to achieve overall balance.

We start the process with a maceration of all botanicals in a wheat-based spirit. A portion of this maceration is then saved to be blended back into a distillate from the remaining spirit. Maceration provides Hypatia with its bold and bitter backbone while the distillate allows us to capture more of the aromatic and subtle qualities from our raw materials. This mixture is then finely filtered before adding organic cane sugar and cochineal for authentic carmine coloring.

Our Rubi Amaro is proofed with Napa Valley spring water from the Coppola family’s estate at Inglenook. Located at the base of the extinct Mount St. John volcano, the water is naturally filtered through lava rock high in carbon, a natural and efficient filter. 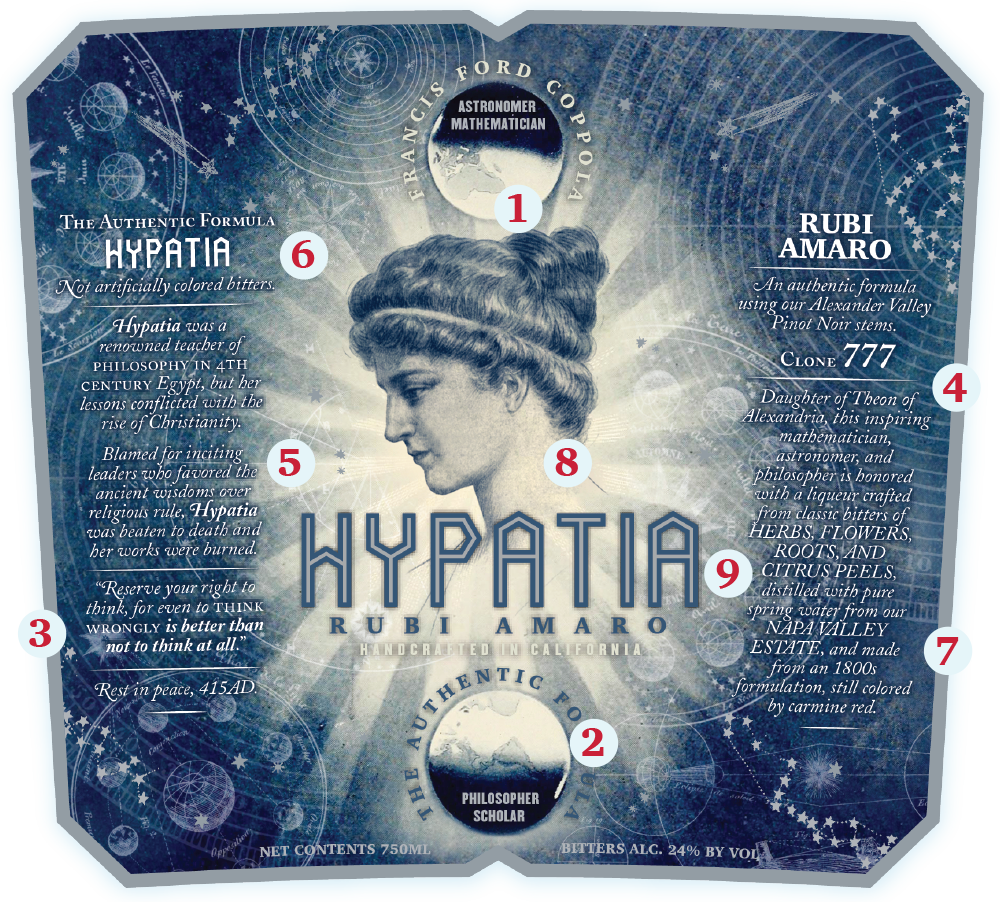 1. Hypatia was one of the last great thinkers of ancient Alexandria and the world’s leading Astronomer and Mathematician in 4th century Egypt.

2. Hypatia was a Greek philosopher and head of the Neoplatonic School in Alexandria around 400 AD. She was an admirable scholar and had a large and loyal following.

3. A famous quote by Hypatia, which stems from her appetite to explore, learn and teach subjects that she was passionate about in a time when those subjects were wildly disapproved of by popular religion.

4.With a nod to love for wine and our years of winemaking experience, stems from Clone 777 Pinot Noir in Russian River Valley are included in this proprietary recipe.

5. An avowed paganist in a time of religious strife, she became the victim of a brutal murder at the hands of Christian zealots. Today she is remembered as a powerful symbol of intellectual freedom and an aspirational feminist.

6. The reddish coloring of this bitters comes from a traditional method, by which cochineal beetles are dried and crushed up to produce a beautiful pigment. This natural method used to be how all bitters got their color, though most are now artificially colored. Hypatia is honored with tradition.

7. Proofed with Napa Valley spring water from The Family Coppola Estate, which sits at the edge of an extinct volcano. This unique geography causes the water to have low levels of dissolved solids which contain minerals that add character and mouthfeel to the finished spirit.

8. Hypatia was said to be incredibly beautiful and had many male admirers who came to her teachings for both her intellect and her great beauty. She went to great lengths to hide her beauty, and her philosophy led her to a life of abstinence.