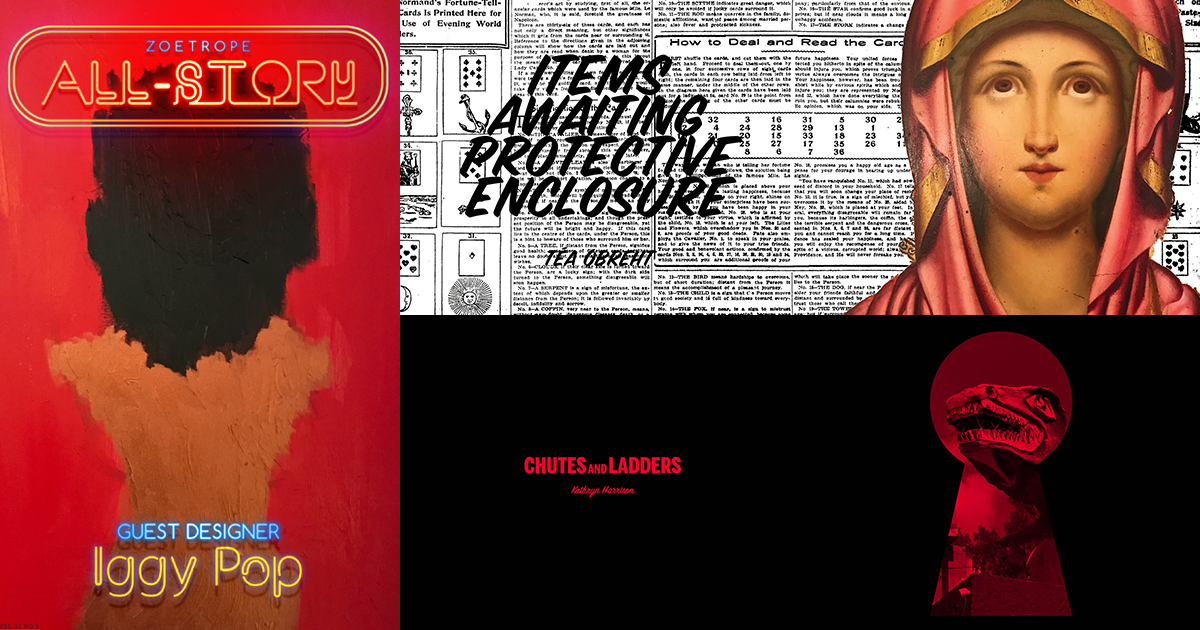 The magazine staff is thrilled to announce the release of the Spring 2017 edition of Zoetrope: All-Story, designed by the iconic musician Iggy Pop. With this issue, Iggy exhibits his paintings and other visual artwork for the first time ever, along with select pieces from his personal collection. (Among those pieces is a Mickey Mantle Louisville Slugger gifted to Iggy by the filmmaker Jim Jarmusch, whose documentary on Iggy’s band The Stooges, Gimme Danger, premiered at the 2016 Cannes Film Festival.)

“Here are my treasures, and my companions,” Iggy writes in a letter to open the book. “I gave them life, and they give me consolation. It is a pleasure to share them in this way. They are part of my spirit.”

Contributors to the issue include Téa Obreht, whose novel The Tiger’s Wife won the 2011 Orange Prize for Fiction and was a finalist for the National Book Award; the celebrated Italian filmmaker Mario Martone, whose accolades include multiple David di Donatello Awards and the Grand Jury Prize at the Venice Film Festival; and Elena Ferrante, whose novel My Brilliant Friend enters production this summer as an HBO miniseries, with subsequent seasons based on the other three installments in her Neopolitan Novels tetralogy likely forthcoming.

In news of past issues, Jim Shepard’s story from our Spring 2016 release, “Telemachus,” about a wayward British naval sub in the waning days of World War II, was just selected for inclusion in the 2017 edition of Best American Short Stories.

Zoetrope's spring writing workshop begins this week, and it's not too late to join a session. These eleven-week online sessions, taught in partnership with Gotham Writers Workshop, are accessible twenty-four hours a day, seven days a week. Each participant receives a one-year subscription to the magazine, the chance to submit directly to our editors, and a weeklong Q&A session with Zoetrope: All-Story editor Michael Ray. Enrollment is strictly limited to sixteen students, so reserve your spot now. As of this writing, we still have space in our sessions beginning today, April 18.